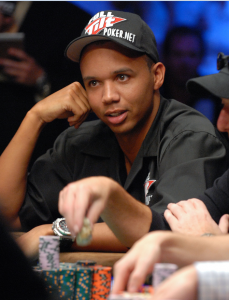 Phillip Dennis ‘Phil’ Ivey Jr. was born in Riverside, California in 1977. Ivey began playing poker, as a 17-year-old, in Atlantic City, New Jersey, where he assumed the false identity of ‘Jerome Graham’; in fact, he played so regularly that he earned the nickname ‘No Home Jerome’. Under the tutelage of several renowned poker players, including Barry Greenstein, Daniel Negreanu and John Juanda, Ivey gradually transformed his not-altogether-successful, loose-aggressive style of play into a meticulous, all-around form, which would eventually win him ten World Series of Poker (WSOP) bracelets and $30.3 million in live earnings alone. Ivey won his first WSOP bracelet in 2000, beating Thomas Austin Preston Jr., a.k.a. ‘Amarillo Slim’, in heads-up play and has since added nine more, in poker variants including Omaha, Razz and Seven Card Stud.

In recent years, Ivey has made headlines as the result of the fallout from his contentious winnings at the baccarat tables in Atlantic City and London in 2012. Alongside Chinese collaborator Cheung Yin ‘Kelly’ Sun, Ivey won $9.6 million from the Borgata Hotel Casino & Spa in Atlantic City and £7.7 million from Crockfords Casino in London. However, he subsequently admitted ‘edge sorting’ – that is, identifying beneficial face-down cards from subtle, unintentional differences in the patterns on their backs – which he considered a legitimate advantage playing technique. Unsurprisingly, the casinos disagreed and launched successful legal action, on both sides of the Atlantic, which effectively forced Ivey into ‘exile’ from tournament poker between 2015 and 2018. Indeed, in the summer of 2019, Ivey cashed for $124,410 when finishing eighth in the WSOP $50,000 Poker Players Championship at Rio Las Vegas, but lawyers acting on behalf of the Borgtata were waiting in the wings to seize the money. Despite his recent trials and tribulations, Ivey was inducted into the Poker Hall of Fame in 2017.