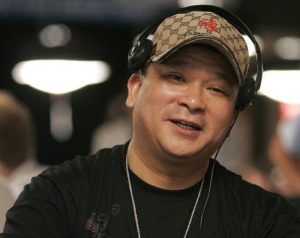 Born in Guangzhou, in southern China, in 1957, Johnny ‘The Orient Express’ Chan emigrated to the United States with his family in the late Sixties, finally settling in Houston, Texas, in 1973. He attended the University of Houston, but dropped out, at the age of 21, and moved to Las Vegas, Nevada, to pursue a career as a professional poker player.

Chan won his first World Series of Poker (WSOP) bracelet in a $1,000 Limit Hold’em event in Las Vegas in 1985, but two years later became the first foreign national to win the WSOP Main Event. He did so again in 1988 and went agonisingly close to winning a third consecutive title in 1989, only losing out to Phil Hellmuth at the final table. Indeed, video footage of the final, heads-up hand between Chan and Erik Seidel in the WSOP Main Event in 1988 appears in the American drama film ‘Rounders’, distributed by Miramax Films in 1998. In the defining moment, Chan looked skyward, in what became known as his ‘Eye to the Sky’ episode, before making a easy winning call, having flopped ‘the nuts’ – a queen-high straight – against the top pair, queens, held by Seidel.

Chan was inducted into the Poker Hall of Fame in 2002 and, three years later, made further history by becoming the first player to win ten WSOP bracelets, when defeating Phil Laak in a $2,500 Pot Limit Hold’em event. At the last count, Chan had amassed $8.7 million in live tournament earnings.