You are browsing the site archives by month.
14Dec 2022 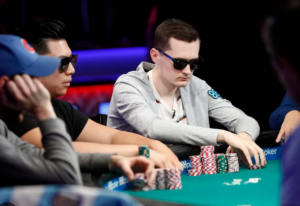 One of the world’s most prestigious poker tournaments earned over £ 1 million for a Computer Science dropout student in the UK. After his first appearance at WSOP 2021, Nick Marchington from Essex won a huge $1.525 000 pot. As the youngest Brit to win the Main Event, Marchington aimed to become the first to win as a young newcomer. Nevertheless, he failed to win the massive $10 million prize, finishing 7th overall.

Due to the 21-year-old gambling age limit in the US, this is Nick Marchington’s first legal tournament. A newcomer to professional poker, this player endured 8500 rivals before making his way to the final nine.

Despite dropping out of British University, Nick won the World Series of Poker at the age of 23. After quitting his second year at Hertfordshire University to become a full-time professional gambler, he played Poker for only a year.

WSOP headlines are rarely won by UK varsity dropouts. You can only imagine how one would feel if they discovered they had become millionaires. And at the tender age of 23 managing your winnings is crucial as there are so many instant millionaires who spend all their money and don’t get anything in return.

A great example of this would be The unassuming, Chris Moneymaker, well known to avid poker fans and players for winning $2.5 million at the 2003 World Series of Poker. He secured a place in the WSOP after wagering $86 online. A tip he gives anyone who comes into large sums of money after winning big is to do nothing for five months and not spend a penny. In his past he had been a degenerate gambler and often found himself broke in college. He doesn’t want to land up in that situation again.

His budget-setting is crucial, and he continues to work as an Accountant even after winning $2.5 million.